I could start out with a million excuses about how busy the week has been and how liquor stores and postal services aren’t open beyond 8 pm during the week and how the Fulton Brewery couldn’t be bothered to answer or return my phone calls. Don’t worry though, I’ll spare you and not go into all of that. Instead, I’ll start with hearing my phone ring last Wednesday night and seeing Grandma H displayed across the caller ID. SHIT.

If you recall, last Saturday was not a great day for the MN Vikings as they fell to the Packers in, what even I have to admit, was quite the blow out wild card game. Adding insult to injury is the bet that lost to grandma; I owe her a delicious case of Fulton beer as a result of my Viking’s poor performance. Now, Grandma is on the other side of that phone wondering about the status of her beer and I will have to fess up to her that it is still not on its way. 😦

In my defense (of course I have a defense) it isn’t from lack of trying. I inquired at the post office about shipping alcohol and have been told that I can not as I do not have an alcohol distributor’s license. My next plan of attack was to have Fulton themselves ship it for me. So at this point I have called Fulton three times today (they are only open Wed.-Sat. 3 pm-10 pm) and no one has answered or called me back. Who cares about all of that now though?! The bottom line at this point is that I have no beer and I’m about to have to tell Grandma something…

So with this 5 minute phone call, things go from bad to worse. Of course grandma is wondering where the hell her beer is. Fair enough. I tell her that I’m working on it (this is the honest to god truth) and she’s cool with accepting that for now. Great, I’m in the clear! Right? WRONG! Grandma has beat me again! While I have been bumbling around to no avail over this damn beer she has already sent me a consolation prize! I can NOT believe this! I’m being beat up, left right and center, by grandma! So, had I won the bet, she would’ve sent me the largest bag of the freshest WI cheese curds that she could find. But given the (unfortunate) outcome, she sent me a small bag of the freshest cheese curds (this is the only way to eat them, even for losers) she could find. So this is really it. I obviously have to pull out all the stops at this point and get that beer out ASAP!!

Fast forward to today. I purchased both kinds of Fulton available at the local liquor store and went in search of someone to ship them for me… 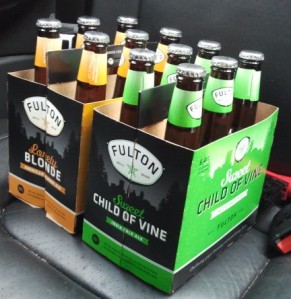 I apparently have to have a distributor’s license to ship using any of these services. Awesome.

I call Fulton one last time and the answer!! Great! But not for long. 😦 Get this – they can’t sell me their own beer because they go through a distributor! This damn distributor is messing everything up for me right now!

What now? Maybe the liquor store will send it for me. They have a distributor’s license, right?

AND THEY WILL they tell me! 😀 YEAH! Man am I relieved! All I have to do is purchase the beer from them (done) and pay the shipping (duh) and they can do it! Fantastic! 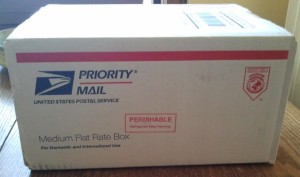 The cheese curds have arrived before I can even get the beer sent! 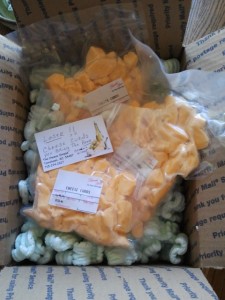 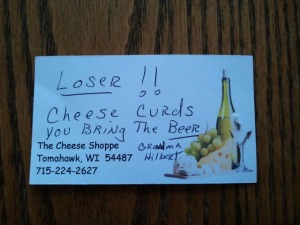 Of course I proceed to tear open one of the bags and gobble half of its contents down before I realize what kind of GI issues I might be in for later. Oh well! They. Are. Delicious. I call grandma to thank her for the consolation prize (…these little guys are seriously fresh — they squeak as you bite through them — and seriously tasty…) and to assure her that the beer is on its way. Now off to ship her the grand prize!

FAIL! 😦 I arrive at the store to find out that a few not so minute details were omitted from our previous conversation.

B) The cost to ship this quantity of beer will likely also be ≥$100.

With that, I picked up the phone and called around to about half-a-dozen other liquor stores in Minneapolis. Someone must be able to do this for me for <$200! Here’s the problem – all of the smaller, local stores that actually carry Fulton, are too small to go through the (apparently extensive and expensive) process of becoming a distributor that can ship across state lines while all of the larger stores that can ship to WI do not carry Fulton. Thank you Murphy.

Here is where I’m at now. I have returned the beer and strapped on my best thinking cap. Initially I really did think that I’d totally run out of solutions and that I’d just have to hand deliver it next time I went for a visit. However, after pondering the situation for the afternoon and consulting a few crafty minds, I think there may be at least one more option. So now it is back to the phone for a couple of last-ditch-effort phone calls.