So I’ve recently bit — hook, line and sinker — onto the Lunds and Byerly’s bait. Part of me hates to admit this as they cater to a demographic that I often can not relate to. However, their produce is soooooooo much better than everyone else’s, they  are striving to be environmentally conscious, and they have BOGO toilet paper, cereal (in enviro-friendly bags), cheese AND Cheez-Its!! BOGO milk and kiwis (KIWI = YUCK!! — I got them for a fruit salad that I was bringing to a   Super Bowl party because it needed something green. I picked around them of course.)  But they aren’t nearly as exciting. 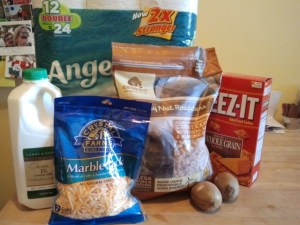 And yes, BOGO means that there is double of all the items in this picture. 1 person totally needs that much cheese and toilet paper. Right? Never mind the bananas, grapes, strawberries and $1.49 apples! They also had loads of BOGO seafood, frozen pizza, chips, salsa, pasta, and sauce. They didn’t want me (or anyone else) to have to miss a minute of Mr. Kaepernick in action! They are so nice. 🙂 Anyway, if you’re in the mood for awesome fruits, veggies and fish, check out Lunds this week!

So, in light –errr, darkness?– of Colin’s defeat, I shall drown my sorrows in  dinners of cereal and (non-kiwi) fruit and snacks of cottage cheese (data not shown) and Cheez-Itz (Note: while this sounds like a questionable decision, I swear to you it is out of this world…in a fantastic kind of way).

P.S. Really people? We’re already surmising that the power outage was an NFL conspiracy? Does the NFL have the much forethought and/or coordination? What about a test run for stifling a certain Mr. R Lewis? No microphone and no camera = no live televised sermon. Just a thought.

One response to “Lunds:1, Kaepernick:0”

I'm a nurse anesthetist who runs. A lot.