Saturdays are for furry friends and pumpkin muffins

That isn’t weird at all. Nope. Not at all.

Today was spent hanging out with these two —

(and working on my thesis and doing laundry…but those aren’t nearly as fun to talk about).

So as the big moving date inches closer I’m trying to eat my way through all of the unique food items that have accumulated in my kitchen. This weekend’s mission was to make a dent in the baking cabinet. Mission accomplished. 🙂

I got the recipe that I used from The Novice Housewife. She has a bunch of super yummy (if not just super yummy sounding, as I haven’t had a chance to try more than a select few yet) recipes from all over the place. Now her version is for bread or muffins and includes a glaze as well. I didn’t do the glaze and modified the rest of the recipe a bit too.

Add wet ingredients to dry and mix until totally combined.

Spoon batter into greased or papered muffin tins (or bread pan) and bake for ~25 min.

Remove from oven and let set for another ~15 min in the pan.

I  savored one (or something like that) with a bit of butter and a cup of tea and damn! Pretty awesome!

Sunrise at the start

Location: Moshi, Tanzania (beginning and ending at the stadium on the north side of town)

Field: Mostly southeast African (surprise surprise) and a number of non-African transplants to the area. There were <300 for the full marathon, but many more running the half and the 5k fun run. Although there was often a language barrier, everyone was very friendly and encouraging.

Support: There were 7 water stations, one with straight sugar to refuel with, but that was it. I packed my bra full of jelly beans and Clif Shot Blocks though, thank god. There were also daladalas around to cart anyone back to the stadium who was in need of medical attention (I have no idea what this actually would have entailed) or could not continue the run.

Pre-race Expo: hehehe…this was the most quaint and low-key expo that I’ve ever been too. Now this isn’t a slam (I feel like it kind of sounds like one) it’s just the way it was. There were two or three folding tables outside of the Key’s Hotel and another few tables inside. There were maps showing the 2013 5k, 21k and 42k courses with seven…that’s right, SEVEN water and aid stations labeled. This is the first time that it was actually confirmed – at least for me – that the course was the same as last year, and really did only include SEVEN water stations throughout the 42 km! Yikes!

Race start: The “race” started at 6:30 am from the stadium on the north side of town.

We luckily were staying just about 1 km away and were able to walk there (in the dark) in about 15 min. All of the runners piled on to the track behind the starting line and waited for the “ready…set….go!”

The Run: The run began by leaving the stadium and going on a 10mi/16km out and back loop. We headed east out of Moshi towards Arusha along the main Moshi-Arusha highway. There were rolling hills and many well wishers along the way. The surface was either the road’s black top or gravel on the ditch, not bad. Personally though, I began struggling with the altitude right away. My big (ignorant) plan was to hold a “conservative” (hahahahaha) 10 min mile for these first “flat” ~10mi/16km. It was everything I could do not to dip into the mid 11s – thank you Suunto Vector 😦 My lungs were on fire – I couldn’t get the oxygen that I needed to save my damn life.

And then it got hot.

By the time we got back into Moshi it was about 85 F and the sun was up. There were two water stations on the out and back (one we hit twice) and the another one in town. One of these stations also had straight sugar to fuel up with but this was it. The water stations were just that, water stations. I was carrying one of the bottles from my water belt and filling it up at each stop – along with chugging 1-2 cups of water as I walked through and dumping another 1 or 2 over my head. We spent about 4 miles weaving through town – and town was getting busy! Roads were totally not blocked off and we just froggered it through the normal Sunday morning bustle. I made it through town and back to the stadium which is at the base of the ascent up Kilimanjaro in just over 2:30 according to the Suunto Vector. OUCH!

And the it was up the f#@%ing mountain!

The final ~12 miles were an out and back UP and then DOWN Mt. Kilimanjaro at ~5% grade. This is where the wheels really came off for me. My goal was to 3 min on, 1 min off run/walk up the mountain and then crank it up and run back down. How hard could it be? 3 min running? That’s nothing, I can always slow down, and then I can even walk for a min! And then coming down, it’s 5% grade! All I have to do is put one foot in front of the other and gravity will practically do the rest…at a 9 min mile or better I bet! I’m not sure if I’ve ever been SO WRONG in my life! It was HOT now. There was NO shade, no breeze, 90-95F and only a 4 precious water stations remaining. The 3 on 1 off crap lasted about 15 min and then I walked (aside from a few flat areas and slight down hills). I held ~10 min/km on the ascent (thank you Suunto Vector).

So that’s it, right? The hard part is over! It’s literally all down hill from here! Or this is what my dumb ass thought from the top of the climb. I cranked up my tunes and proceeded to trot off down the mountain like it was my job. How quickly I was reminded that no, in fact this was NOT my job. However, what I actually am is a nerdy graduate student in chemical engineering who quite frankly had NOT A DAMN CLUE what she was getting herself into! If I thought breathing was rough at 3000 ft, breathing at 4000 ft was impossible! So, I slowed down and proceeded to shuffle/walk theh 6 mi back down the mountain. Damn.

All wasn’t lost though – the scenery was beautiful, the little kids that came and tagged along with me were adorable and according to my (very frequent) calculations – thanks again Suunto Vector – I was still going to make it in under the 6 hr cut off. By the time I made it back through the last water, they had run out of cups and were fishing dirty cups back out of the ditch and filling them with water. I was sooooo close to snatching one up and guzzling it down before I noticed this! Not cool. After spending 5 hrs on my feet in the direct sun (now it was ~95F), I am very glad I didn’t test my immune system and go for it anyway. I was tired, hot and dizzy enough that it may have seemed quite rational. And let’s be honest, I’ve probably done crazier shit in my (relatively) right mind. I finally finished in 5:45ish (in the same vein as running water stations, Tanzanian time keeping isn’t the best) and never thought I’d be so happy with a 5:xx marathon as I was when I came back into that stadium. 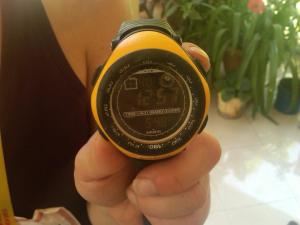 Lucky for me I had a very patient/understanding buddy waiting for me with water and cookies to help drag my ass back to the hotel for a shower. (Thank you Al!!) 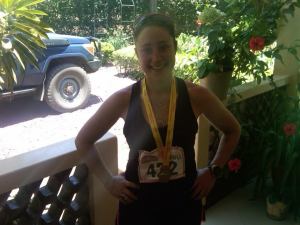 The rest of the day was stretching, leg rubbing, a very slow shower, some toenail surgery and a very very slow walk into town for the best pizza and milk shake for dinner. While I will never do this marathon again, I am SO SO SO glad that I did do it once.

Pro compression has some SWEET deals going on right now!

2. On their website, ProCompression has 40% off + FREE SHIPPING right now for all of their marathon socks with code BLG13.

www.mile-posts.com
The Hungry Runner Girl
sweat once a day
A WordPress Site
Rather Be Runnin'
My Blog
Maiable Music
74 running