Mon 8/12 -13 mi / 127 min
Getting up and out of bed to start an experiment at 5 am is a great way to motivate a morning run. It was cool and calm and beautiful out. And damn do I feel accomplished after getting a half marathon in before 8 am! Who needs to work for the rest of the day after that. Oh yeah…I do…

I was quite worried after yesterday’s run that I’d hardly be able to put one foot in front of the other today, much less at a reasonable pace. Luckily my feeds were unfounded. I wasn’t exactly breaking any land speed records, but I felt good…legs and lungs. Coolish (high 70s) and calm

A nice cool morning run (once I finally dragged my ass out of bed…and despite ending up on the highway for almost a mile (surprisingly NJ commuters do no appreciate this) long after I was too far out to turn around). While it is VERY annoying to not have ample lighting out on the country roads in the lovely Garden State, once the sun is up and cooperating they are really a beautiful place to run (minus aforementioned highway)

Fri 8/16 – rest (i.e. what was intended to be a very civilized Make Your Own Sushi Night)

After what turned out to be one hell of a Make Your Own Sushi night / a shit load of gin drinking night at Dr. S’s, the morning 14 mile buddy run came no where close to happening. (Unless you count sleeping in until almost 11 when you set your alarm for 7:30 a 14 mile run…in which case I need to move to the universe that you live in!!) All was not lost however. In fact, Dr. Trot is quite proud of herself as she got in all 14 miles (solo) later in the day. Despite getting horribly lost (despite writing the detailed directions in sharpie on my arm…who knows…who the hell knows…) 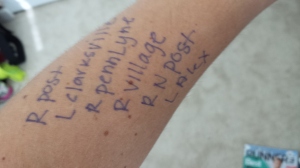 it was a good run. It was long, but I really can’t seem surprised about that, can I? Getting out around 6 ment that I had 2 hrs of sunlight left (thank you NJ with your early setting sun and complete lack of freaking street lights) so I got just over 11 done on the road and then sucked it up and went in to finish up the remaining 2.75 on the TM. I was pleasantly surprised about how only mildly aweful this last part was. At least that’s what I keep telling myself…

I was quite worried about getting the legs to turn over (and then not losing my mind from boredom in the event that I did get going) after yesterday’s long run. But all went well! I was able to sneak the miles in during experiments in the afternoon. Cool (high 60s) and damp with a very short, light short shower.

So this week was good. All of the workouts felt good: no new aches or pains and no worsening of the ones that are already here. Felt strong at the end of just about every run (this is big for Dr. Trot). Unfortunately Dr. Trot lied last week and did not find (much less engage in) her plan for strengthening her core, abs and/shoulder. Next week!

Now of ourse this weeks mileage was really way too high, but with the make up long run on Monday, the miles were at least spaced out as inch as possible by front and end loading. Fortunately, even with the excessive milage, I felt fresh at the beginning of each run and never really felt like I was running on empty by the end. Lucky? Denial? Both? That being said, I’d really like to keep the long run consistently on the weekends though in order to avoid this in the future. Good luck to me. (Likely to be explained in Week 6.)

Threads – running, skirts, shorty socks and Mizunos (Wave Creation 11s for the trails AND the Wave Elixer 6s) for the roads

And again, due to my delinquency…

Any favorite stretches that make a huge difference for you?

Filed under Marathons, Trotting, Work out

I'm a nurse anesthetist who runs. A lot.