Out the door after work before the sun went down. Nothing special, I’ll take it.

We won!! 😀 So I somehow managed to be roped into playing flag football again tonight. I figured what the hell, it’s the last game of the season, why not? It was cold (50F…god, I’m becoming a sissy…) and there were extra girls so I wasn’t on the field the whole time. I can’t say I caught a single pass or did a whole hell of a lot on defense to be perfectly honest, but we won! 🙂 And I came away with a lovely bright orange Princeton Tigers Champion t-shirt. That’s what this is all for anyway, right?

I’m 30, I’ve been wearing a bra for 20 years (or something like that) and yet somehow I still manage to forget to pack the damn thing when I’m loading all of the other running essentials into my bag in the morning. Really? This is like packing half a shoe! What is wrong with me? Anyway, I needed to get the run in and I needed to learn a lesson, so after work I set off for the 6 mile run home to change and then run back. So, only half of the run was totally out of control (this is really all that I could have taken of this) and although I finished cold (again, it’s like 50F…I need to stop using the c word) and in the dark, at least it got done. I was actually feeling pretty good at the end, which was a nice consolation prize (this may or may not have had something to do with the packages of fruit snacks that I gobbled down while I was at home…)

So I’m just going to start by putting it out there that I was VERY BAD this weekend.

a) I did not run today. None. Zero. Zilch. I did spend the morning walking to and across the Brooklyn Bridge though.

We do look our best freezing cold and in 50 mph (at least) winds.

tonnarelli tossed in pecorino and served out of a cheese wheel

…as well as the best pumpkin ravioli you’ll EVER eat). For a full review, be patient, there will be/may be one on here soon(ish). 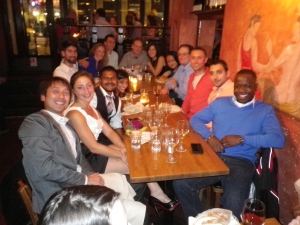 What’s a birthday party without fire works in the bar?!?!

But, who can say no to smoke rings for all? 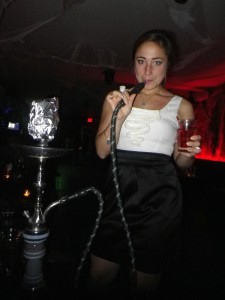 d) And then there were beers and dancing…

…with the real troopers who were still left.

e) And closing out the night by scarfing red velvet cupcakes (thank you Samia!!)

This morning Team CEMS drug their asses out of bed and climbed into our team uniform for a run around Central Park.

It was fantastic 🙂 It was calm and cool out and I had the best running company ever. 🙂 Of course it wasn’t the long run that I was supposed to do, and I might pay dearly for this in 3 weeks, but I’ll cross that bridge when I come to it.

After the run it was off to brunch at Friedman’s. The wait was a bit long (>30 min for 5 hungary people) but the food and coffee were perfect. I had the Southern Breakfast which was…

Full disclosure is that my food was actually just ok. After sampling everyone elses’ food though, I feel qualified to testify that overall, the food was fantastic. Per usual, there will be a review…someday…

Not what I needed for the last high mileage week. But,  you know what? I also needed a sweet 30th birthday party (yes people, this was a need, not a want) and even I know that at some point we have to make choices. I know/think/hope/know that I made the right choice on this one 🙂 (Ask me about this on the afternoon of Nov 17th…on second though, maybe not…)

Threads – tanks and tees, running skirts or capris for the chilly mornings, + compression for the long runs and Mizunos (Wave Creation 11s and Wave Elixer 6s)

The Hungry Runner Girl
sweat once a day
A WordPress Site
Rather Be Runnin'
www.nycrunningmama.com/

Running, Training, Motherhood, Career, Life...and Everything In Between