A lovely early morning in lab lit the fire under my ass to get the run done early. The cooler weather is nice, but it does necessitate a bit more though to go into dressing and a bit more time to get the stiff joints and tight muscles all warmed up. That, and I’m old. 😦 Now I’m probably the only one saying this, and I will probably eat my words later, but it’s nice that the winters here are still rather damp. I can feel even this very modest drop in humidity (coupled with the cooler temps) through out my lungs. MN, how did I ever survive you?!

There is something very satisfying about bailing out of work from 8-9:30 am to get my run in during daylight hours. Although I felt like I was working harder than I really should’ve had to, it was a beautiful morning, I didn’t get lost and I finished the run all toast warm in my ruffled skirt and tank top. Once again, my complaints are unwarrented…I suppose…

Off to AICHE for the annual (oversized) national chemical engineering conference! (And some serious mischief-making around San Francisco of course.) For example…

…early on the first evening of the conference…

…and a bit later in the evening. (Don’t worry, we were all seeing double at this point.)

Dr. Maroof and Queen Penny were absolutely gracious hosts for the two days that I spent in Berkeley before heading into DT SF for the conference. They made me a most fantastic dinner for me when I arrived on Friday night. 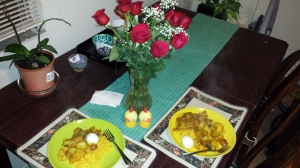 They also gave me a most totally perfect belated birthday gift – a purple marathon Camelbak!

What a great way to start off my pre-conference weekend! I could get used to CA!!

On Saturday morning we got up and turned dinner left overs into an awesome brunch of south Asian seasoned rice + beans and shrimp + potato + cauliflower + cheese quesadillas. We might be kinda into weird fusion foods. Maybe.

Then, we got all suited up

…and a close-up of my new glorious compression socks from Aki. Happy Birthday to my feet!!

and took out the bikes (thank you Noem for lending yours to me, it was awesome!!) for a leisurely 10 mile ride along the north coast of the bay,

and then a grueling 10 mile battle up to the top of Berkeley, to Tilden Park

and then back home. 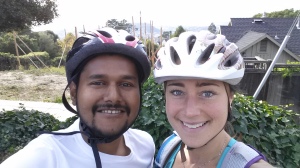 The climb up was honestly the most challenging and treacherous bike climb I think I have ever done. The perpetual gradual incline wore you down while the wicked steep sections totally blew out your quads in no time. And then the switchbacks. Ahhh yes, the switchbacks (at this point, why not?). They made everything super precarious, just to ensure you were actually being challenged.

Also, once we arrived at the farthest point from home in our route, we had an unfortunate spat between Dr. M’s ankle and his bike pedal clip.  (Apparently frantically trying to clip in before you roll backwards down the damn hill is not the safest.)

Luckily there were some EMTs in the area (originally called to help with “a dog that was having a problem in the lake…” WTF?!?!…) who helped us bandage things well enough to get home. Thank god it was 5 miles DOWN the mountain to get back.

So (of course) this was not the most ideal Saturday workout to do two weeks out from marathon weekend, but who is going to pass up on a day long SF Bay Area biking expedition? The only people who come to mind are total idiots and professional athletes. Contrary to popular belief, I don’t find myself fitting well into either category.

I started the day with a beautiful early morning run along the bay, taking the same route that we biked yesterday. 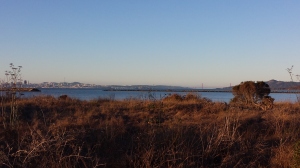 In case you’re interested, there is a positive correlation between ones amount of Facebook posting while running and the likelihood of appearing to be still drunk from the previous night. I may (or may not) have been one of those…

After getting back from these first 10 miles it was time to dash off to SF for the first day of the conference. In contrast to Drs. S & M, my talk was not until Tuesday afternoon, so I did the only rational thing upon arriving at the hotel – I dashed out the door for 3 more miles through Golden Gate Park and then a 3 mile walk home. (I sadly don’t think I get to count these last three towards my daily mileage though…)

So obviously this mileage is quite low, even for the beginning of the pre-race taper. On the bright side, was able to take advantage of the northern Bay Area and get a beautiful, and extremely challenging, bike ride in (yes, I am telling myself that this counts for something) as well as my long run for the week (albeit only 12 miles and broken into 2 segments, but never mind…) On an even brighter side is that there are only two more weeks until the marathon!! (Ok, fine, there is really only one more week now that I’ve finally gotten this damn thing written x-(

www.mile-posts.com
The Hungry Runner Girl
sweat once a day
A WordPress Site
Rather Be Runnin'
My Blog
Maiable Music
74 running